Kriner’s Diner is a small, family-owned business. They’re a staple of Anchorage Alaska, where people can grab their delicious food any time of the day. But like most small businesses, they were hit hard by the initial wave of government-mandated COVID-19 closures. As Anchorage mayor Ethan Berkowitz continues to impose ever more draconian measures on the populace, diner owner Andy Kriner has decided that he’s had enough. Now this Anchorage diner defies COVID-19 orders, both to continue serving food and to thumb their nose at the tyrannical government.

Kriner refused to bow to the newest order to shut down dine-in service, and made no effort to discriminate against customers not wearing masks. When word got out, customers flooded into Kriner’s—not only to enjoy their delicious food, but to support them against the government. Many people, seeing the dining room full, left a monetary donation rather than wait to eat. “The people have spoken!” announced a waitress, brandishing another donation. So many people started donating that the employees set up a special donation receptacle so they had more time to serve customers.

The Municipality of Anchorage, furious that people are thinking and acting for themselves, issued a stop work order to the diner on 4 Aug, threatening fines and imprisonment if the Kriner family and their employees returned to work without the government’s permission. Kriner’s cheerfully announced on their Facebook page that they would close early on 4 Aug to prepare for opening on the next day—which they did, to a packed house.

After attempting to call for comment and receiving a busy signal all day, I finally dropped by the diner to investigate the situation and their food (the burgers are great!). The employees had taken the phone off the hook, because there’s nobody available to answer it during the day. When businesses in Anchorage were allowed to reopen, some of Kiner’s employees realized they could make more money at home collecting the government’s new unemployment checks. “People just aren’t coming in to work,” Andy Kriner, the diner’s founder and owner, explained. 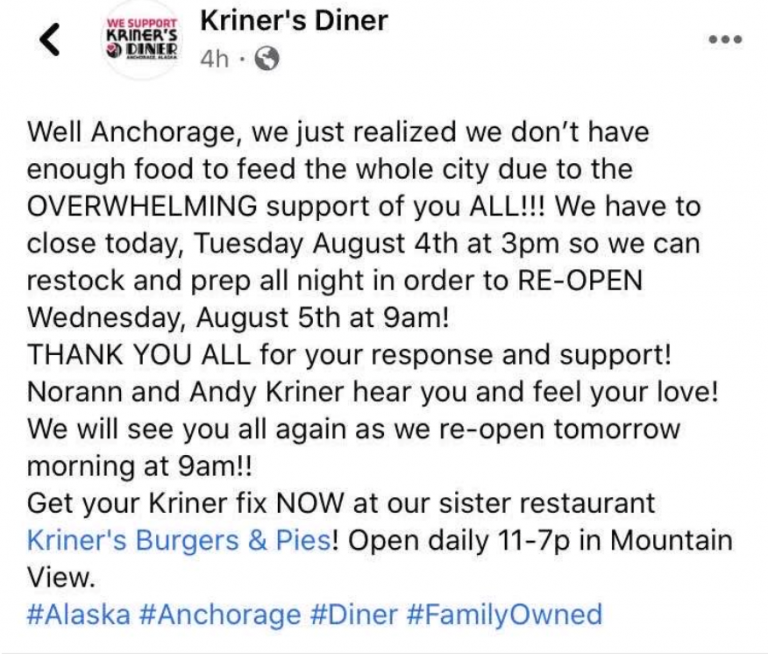 Currently, the diner is only open from 9AM to 3PM, and is not offering to-go orders. “I only have one cook now,” Kiner said. “He can’t cook dining room and carryout. I can’t do that to him.” This is just one more example of how the ostensibly well-intentioned actions of the government inevitably end up hurting the most vulnerable people.

Despite the difficulties that Kriner’s faces, the people of Anchorage who are sick of the tyranny of their government have rallied around the small diner. Other businesses, like the Little Dipper Diner (also of Anchorage) have also refused to comply with government mandates and subsequent “stop work” orders. Hopefully, more people and businesses will begin to emulate Kriner’s Diner and the good people of Anchorage in taking back their rights from oppressive governments.

The best part is that people who are concerned about contracting COVID-19 are free to stay away from Kriner’s. The experience of Sweden shows that coercive government mandates like the Anchorage establishments are rebelling against are not necessary to “flatten the curve.” As this Anchorage diner defies COVID-19 orders, Kriner’s is standing up for people to do things voluntarily, without immoral coercion from the government. As we say here at VIA, good ideas don’t require force.