One of the only good things about the tyrannical reaction to the pandemic has been the outpouring of support for people the government has hurt. Tens of thousands of people have lost their jobs due to state restrictions and lockdowns. But people are stepping up to help where the government inevitably hurts. For example, one chef is offering free meals to jobless individuals at his restaurants.

Chef Andrew Gruel (his food is better than his name) is a judge on the Food Network and the co-host of the SoCal Restaurant Show. He also owns Slapfish Seafood—a restaurant chain with 27 locations in the US—and the Big Parm pizzeria. On 3 December, Chef Gruel took to Twitter to remind everyone that people who had lost their jobs could get a free meal at his restaurants. 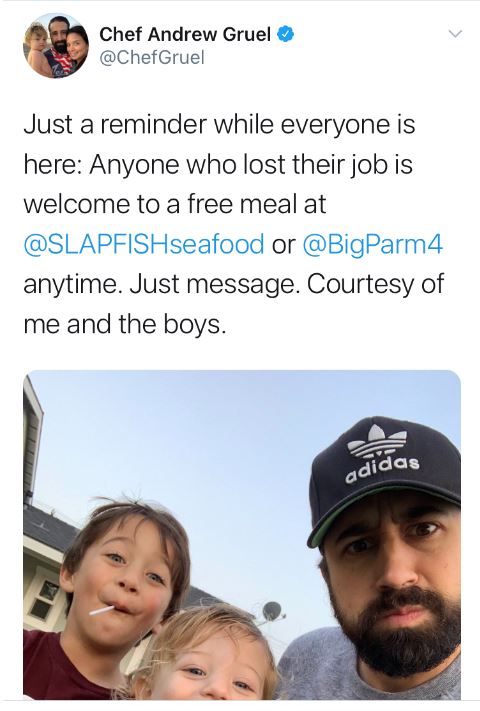 Hundreds of commenters raved about not only the Chef’s food, but about his kindness and generosity, and his willingness to assist those whom the state had harmed. Some people even offered to pay for the meals of jobless folks who take Chef Gruel up on his offer. 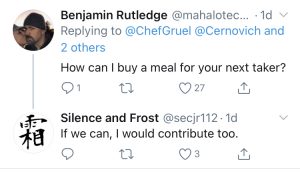 Predictably, not everyone was happy about people helping other people. The propaganda put out by the government and mainstream media has warped many people’s sense of right and wrong, even to the point where voluntarily helping people in distress is denounced as “selfishness.”

Another common criticism of charity such as Chef Gruel’s is that greedy people will take advantage of his generosity, nobody will pay for meals, and he’ll lose money and go out of business. On the contrary, over the weekend the restaurants pulled in double the usual business as people flocked in to support Chef Gruel. And that money, Chef Gruel said, would be used to give his employees a holiday bonus. 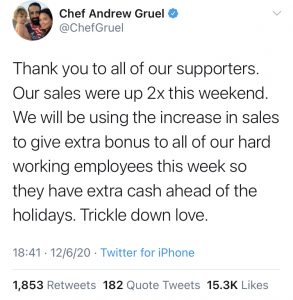 The general condition of humanity is that people feel empathy for each other and want to help. This is why voluntary charity works—as the example of Chef Gruel and many more like him demonstrate.