Since the mid- to late-1800s, better working conditions have been proposed by both activists and government bureaucrats, with constant political pressure on entrepreneurs having yet to cease. Of the many policies that have been suggested or, better yet, enforced, there is one in particular that has remained consistent: increasing the minimum wage.

As of late, it has been referred to as the “living wage.” This policy essentially advocates that companies increase the pay of their workers, particularly those that maintain a meager amount of skills valued in the market. After brief analysis, however, one will conclude that the “living wage” is nothing more than an asinine populist term that maintains steep repercussions not only for companies, but also for the intended beneficiaries of the policy.

Even when examining this progressive concept without much thought, it still falls under scrutiny. Its advocates claim the wage is determined by calculating the expenses for food, healthcare, rent, transportation, childcare, and a handful of other costs in a particular area. Like the CPI, these costs are completely arbitrary. Of the millions of individuals who maintain subjective consumer tastes, preferences and tendencies, how can one accurately determine an average price that would efficiently fulfill each individual’s need?

Before we proceed, one must grasp those economic dynamics that determine wages, which we will find is nothing more than a price. Prices, and the signals they convey, are a vital tool in a market economy. They are essentially a language. They allow both producers and consumers to observe and communicate the aggregate value of a particular commodity or factor of production. These prices reflect the current market conditions of the good or service consumers wish to purchase, without having to know its current supply.

Think of it as a simplified ledger conveyed into a single number.

The failure to realize demand is the vital determining factor of a price. This has created the claim that an increase in wages inflates the price of a good, which is misleading. Prices are not set by producers and the costs of production, but rather by consumers. The price can only be raised by the producer to the point where consumers are willing to purchase the good, due to elasticity. For the remainder of this analysis, we will refer to demand as the demand for labor.

When demand has been realized in the marketplace, workers will offer their labor to meet the demand, which constitutes the supply of labor. 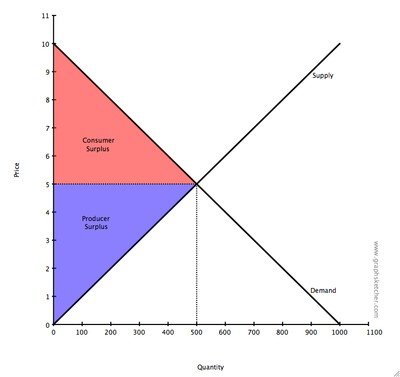 In essence, the living wage intends to support those who maintain little to no skills. The main concern with this notion is that there is already a large supply of unskilled workers in the marketplace. When the wage rate is mandated to be set above its equilibrium price, a surplus of labor arises. With each additional increase in labor, the utility of each additional laborer decreases. This is otherwise known as the law of diminishing marginal utility. During the production process, the entrepreneur utilizes the amount of labor required to fulfill the marketplace demand. With each additional worker enacting their labor, a point will ultimately be reached where an additional input of labor will generate no return, and instead increase the cost of production. This concept is known as the law of diminishing returns.

With these economic principles being realized, the entrepreneur will determine the amount of labor needed to generate the required output to receive a profit, or at the very least break even. The entrepreneurs will pay each laborer their price which was set by the market demand for their skills well before the production process is complete. This is because laborers tend to have a high time preference, meaning they prefer income now rather than later. This causes the individual with a high time preference to receive their income at a discounted rate.

This concept is what determines the wage rate of the laborer, known as the discounted marginal value product, or simply the marginal product. Simply put, each laborer’s wage is determined by the required output to satisfy consumer demand. But why, one may ask, has productive output increased over the past few decades, yet wages have been stagnant when adjusted for inflation?

One could make dozens of suggestions, but the most observable is the increase in the productivity of capital goods. One must recall that labor is not the only factor of production.

Contrary to those who favor a universal basic income and who maintain this erroneous fear of automation, the increase in output due to capital investment is a good thing. This is because the increase of output at lower production costs due to capital investments allow consumers to purchase goods at lower prices! This is why, contrary to Keynes in his General Theory, real wages are what is important, not money wages. As long as artificial inflation is not induced, the purchasing power of real wages to consume goods and services ensures a respectable quality of life.

We have established what constitutes the wage of a laborer, and have also determined that wage rates artificially held above the equilibrium price set by the market results in surplus labor, thus unemployment.

We may now conclude that this surplus of labor induced by the artificial wage set by the government, in fact, harms and discriminates against unskilled workers. As noted earlier, a brief observation of the “living wage” can be turned on its face. With further analysis, it is simply not feasible and maintains damaging ramifications. The “living wage” is nothing more than left-wing populist rhetoric that seeks to reach politically-expedient goals in the immediate future, disregarding the externalities and negative long-term effects of the policy.