A thousand or so motorists were stranded in British Columbia after heavy rainfall led to major flooding and mudslides cause highways to shut down. Local hotels and motels immediately filled, leaving no vacancy available for many of the people stuck due to the storm. This left those who could not find or afford a place to stay to live in their vehicles for days. Soon hunger and thirst became real concerns for many. That’s where a local pizza shop owner stepped up—with free pizza.

Rupinder and Dewan Davesar, owners of Hope Pizza Place, took matters into their own hands and began addressing the situation the best way they could. Left with only one working gas oven due to power outages, they fired it up and began cooking free pizza for the stranded motorists. They gathered a group of volunteers to assist them in their efforts to venture out in the rain to bring free pizza and other hot food to those in need of a meal. According to the National Post, Rupinder said “We could have made lots of money but we have other days to do that. We take the blessings from the people today. I think that will pay off in the future for us.” 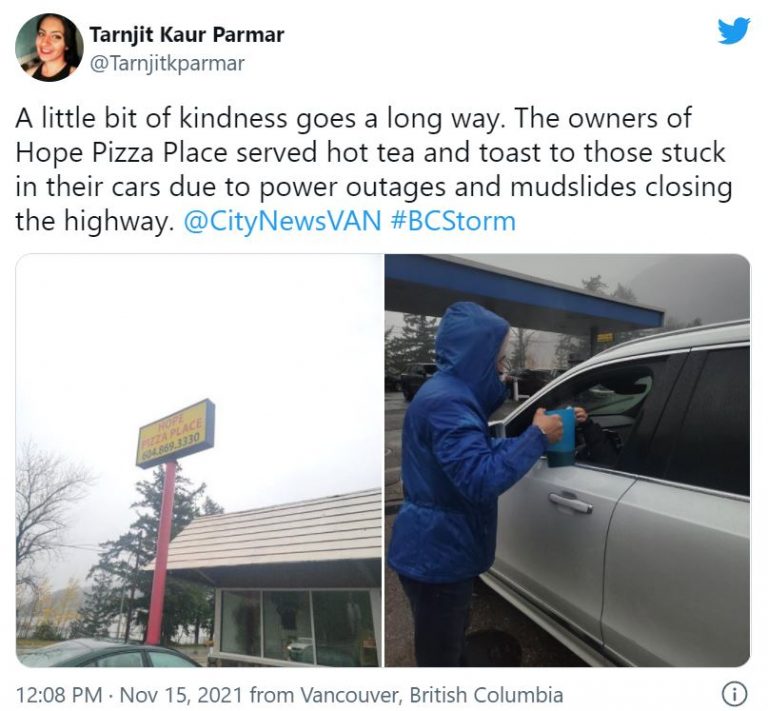 The weather itself was a rare occurrence and called an “atmospheric river.” The amount of rainfall from it broke local records and initiated a response from the military to get aid to others. Helicopters were brought in to airlift people out of harm’s way. Teams were put together to help dig out vehicles buried by mudslides and to save any potentially buried victims. It was a slow process, and with over a thousand people stranded, concerns from the motorists became very real.

One woman, Angela Howard, was stranded with her two children in their vehicle. She had rigged up plastic bags outside the car to catch rain in order to provide the family with the basic necessity of water. Angela had to keep a close eye on her car’s gas in order to provide needed heat to keep her and her children warm from the cold. She recalled the experience, “They are getting scared. My heart breaks listening to my kids (ask) for water and food and I have nothing to provide for them.”

Another motorist, Melanie Forsythe, was driving home to Hope from Vancouver with a couple friends and ended up stranded for 18 hours before being helicoptered to safety. “We all had moments like, ‘Is this it? Is this the last time we’re going to see our kids?’ We were talking to our parents and our families, but it was just a scary situation,” she said of the situation.

The size and scope of the storm was massive and left a very dangerous situation. Considering all the risk, it was quite amazing of the Davesars and fellow volunteers to do what they did: not only cooking and giving away free pizza but risking the trips out to the stranded motorists. It’s another of countless examples of the lengths people will go to help others for no gain of their own. Voluntaryism is all around and happens every day. Some examples are extraordinary like the one set by the Davesar family, and the use of their pizza shop and local volunteers. 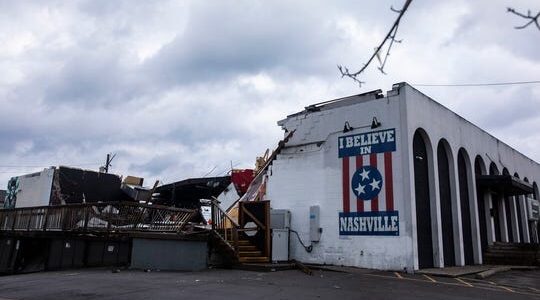 During the early morning hours of March 3rd, a very violent EF3 tornado moved through Nashville, Tennessee. Most of the Music City’s residents were asleep soundly in their beds as the funnel tore into downtown with its echoing roar.

By the time the storm approached Cookeville, Tennessee, it had produced a terrifying E4 with 175mph winds—the strongest our nation has seen in nearly four years. A resident of Cookeville, Eric Johnson, was crouching with his family in a bathtub when they were pulled and thrown 50 yards into a pile of debris. While they were lucky to survive, 24 lives were claimed in Nashville and Cookeville in total and hundreds of injuries were reported.

When the sun rose on March 4th, Nashville looked entirely different than just hours before. Displaced families sifted through piles of memories to grab pieces of their own. Streets in downtown and closely lying neighborhoods were decorated with torn floral curtains, shattered flat screen televisions, family photos, and incredible amounts of debris piled on top of each other in mounds. Within just days, over 2,400 volunteers arrived from all over the US to feed residents and help with clean up.

The morning after the storm’s harrowing devastation, Voluntaryism in Action launched the “Nashville Tornado Disaster Relief” fund. Within days, our donors were able to raise over $5,000 that was sent to the Community Foundation of Middle Tennessee. There, these funds will be utilized to help with disaster relief and family needs.

With the power of voluntary assistance, these cities are being pieced back together quickly—action greatly needed considering we are in the beginning of what looks like a very active storm season in the southeast. If another crisis like this occurs, the VIA team stands ready to look for ways to send help to those in need. “Nashville Tornado Disaster Relief” is poised to become “Anytown Anystorm Disaster Relief,” thanks to our generous donors.