On Thursday, Lord of the Rings’ Gollum actor Andy Serkis announced an independently led charity fundraiser to take place the following day on Friday, May 8—reading the Hobbit over livestream from cover to cover. Gollum livestreaming The Hobbit for charity is probably a once-in-a-lifetime experience.

Serkis said that “While times are tough, I want to take you on one of the greatest fantasy adventures ever written, a 12-hour armchair marathon across Middle Earth while raising money for two amazing charities which are doing extraordinary work right now to help those most in need.”

Serkis didn’t disappoint with delivery. He read the dialogue in various different voices, including his famous take on the character Gollum. The “Hobbitathon” was linked over the GoFundMe hosted by Serkis that has since raised over £290,000 and is quickly closing in on the £350,000 goal. Over 650,000 people around the world tuned in to support the virtual fundraising event. The funds will be split evenly and directed to the charities Best Beginnings and NHS Charities Together in their efforts to respond to relief for the Covid-19 pandemic.

Best Beginnings, of which Serkis is an ambassador, is a charity that supports new and expectant parents, babies, and toddlers. They provide educational support and encouragement with their Baby Buddy app, which comes with medical information and videos to help parents while they are unable to have a wider support network.

The app also provides a clinically supervised 24/7 “Baby Buddy Crisis Messenger,” which is available in times of immediate emotional crisis. “By supporting Best Beginnings to support parents, we can all play our part in helping protect babies and toddlers at this time of national emergency and protect their futures,” Serkis wrote in his GoFundMe.

NHS Charities Together is an organization that is providing needed care to medical service providers, volunteers, and medical patients during the crisis. They provide nutrition, mental health care, electronic devices to keep in touch with loved ones while they are apart, and more.

Although the livestream is now private, the GoFundMe is still up for support and donations are pouring in for the act of goodwill. Gollum livestreaming The Hobbit for charity is more evidence that voluntaryism can be effective!

Dolly Parton donated 130 million books to children, and the number continues to climb. As an award-winning singer and songwriter, Parton is well known for her work in the entertainment industry. But she’s less well known for her philanthropic work—especially when it comes to books.

Parton was born in a one-room cabin in Tennessee, the fourth of 12 children. She described her family as “dirt poor,” and although her father was business savvy he could neither read nor write. As Parton achieved more and more success, she began to think of ways to help others, particularly in poor rural areas like where she grew up.

As Parton said, “When I was growing up in the hills of East Tennessee, I knew my dreams would come true. I know there are children in your community with their own dreams…The seeds of these dreams are often found in books and the seeds you help plant in your community can grow across the world.” And so in 1995, she launched Dolly Parton’s Imagination Library in her childhood home of Sevier County, Tennessee.

The idea for the Library was simple: because a lot of families don’t have the means to purchase books, each child who joins the program is mailed an age-appropriate book every month from birth to five years. If the parents sign the child up right after birth, that’s a total of 60 books by the time the child turns six. And multiple children from the same family can sign up—meaning that a four-child family could potentially receive 240 free books, and a 12-child family like the one Parton grew up in could receive a staggering 720 free books.

Families responded to Parton’s generosity. By 2003, Dolly Parton’s Imagination Library had mailed one million books. In 2004, the program expanded to the entire state of Tennessee. Nationwide coverage followed soon after. The program launched in Canada in 2006 followed by the United Kingdom in 2007, Australia in 2013 and the Republic of Ireland in 2019. With growth like that, it’s no wonder Dolly Parton donated 130 million books to children.

"I think it is pretty clear that now is the time to share a story and to share some love.”

As government lockdowns during the coronavirus crisis drag on, Dolly Parton’s Imagination Library has started a new program of weekly bedtime story videos. “Goodnight With Dolly” launched on 2 April, with Parton herself reading the books. Regarding this new program, Parton said: “This is something I have been wanting to do for quite a while, but the timing never felt quite right. I think it is pretty clear that now is the time to share a story and to share some love.” She couldn’t be more right, and during this crisis people all over the world are willingly helping each other.

One of the objections often raised to a purely voluntary society is that not enough people will voluntarily pay for things like public libraries, and so poor children will never be able to read books. As of this writing, there are over 1.5 million children registered with Dolly Parton’s Imagination Library, and over 133 million books have been mailed. Parton’s amazing example not only shows that there are other methods to meet literary needs than the archaic model of the public library, but that those needs can be met by people acting voluntarily.

The government’s belated response to the coronavirus has been to force everyone they can to stay indoors—sometimes at gunpoint. In addition to the economic impact, many people are getting a serious case of cabin fever. People stuck at home need something to do before they start weaving baskets. But as usual, voluntary efforts take over when the state fails, and private entities are combating government enforced boredom. There are too many people helping to count, but here is a quick rundown of some highlights of the efforts being made.

In addition to donating millions of dollars to medical coronavirus relief efforts, Amazon has made much of its family-friendly movies and TV shows available for free, including classics like Arthur and Reading Rainbow. They have also altered their Audible audiobook streaming service to make hundreds of titles in multiple languages available to listeners for free—even such apropos titles as “Brave New World” and “Atlas Shrugged.” 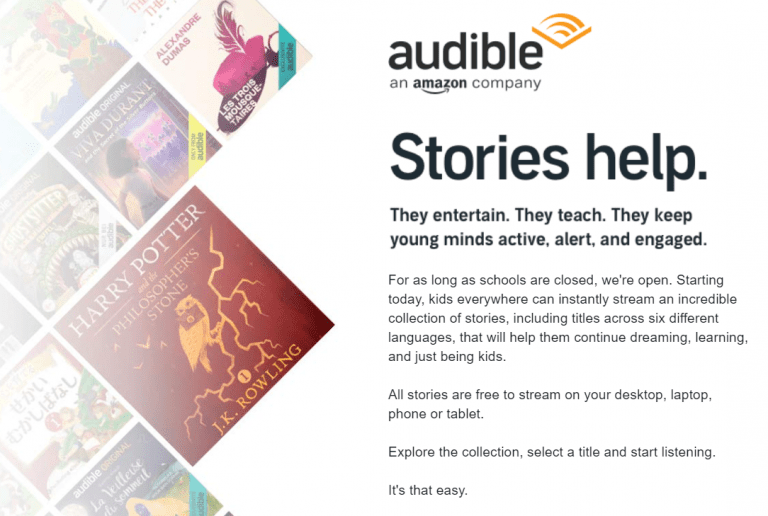 Amazon is far from the only player in the digital media industry. Not to be outdone, Apple has added a limited-time “Free Books” section to its Apple Books app. Nonprofits are not being left behind. The non-profit online library Internet Archive has created a National Emergency Library where books can be read without the main site’s lending restrictions.

Pokemon Go is a game beloved by millions across the world. Unfortunately one of the main mechanisms in the game is walking around outside—a great form of exercise that, in some areas, the government will arrest you for nowadays. But the creator of Pokemon Go have altered the game’s mechanics temporarily to make it possible to catch Pokemon easily from your home and making it easier to interact with other players—even giving away free in-game items.

Individual creatives are also acting to meet the mental and emotional needs of people imprisoned in their own homes by the government. Award-winning children’s artist Mo Willems is holding virtual “lunch doodle” sessions from his home. Using the hashtag #OperationStoryTime, authors of children’s books are using social media to provide free readings of their books for families. You can even find Julie Borowski reading her modern classic “Nobody Knows How To Make A Pizza,” and Connor Boyack reading “The Creature from Jekyll Island” from his Tuttle Twins series.

Neither are the finer aspects of entertainment being left out. World-renowned actor Sir Patrick Stewart is tweeting out daily readings of Shakespeare’s sonnets. “When I was a child in the 1940s, my mother would cut up slices of fruit for me (there wasn’t much)”, Stewart said, “and as she put it in front of me she would say, ‘An apple a day keeps the doctor away.’ How about, ‘A sonnet a day keeps the doctor away’?” 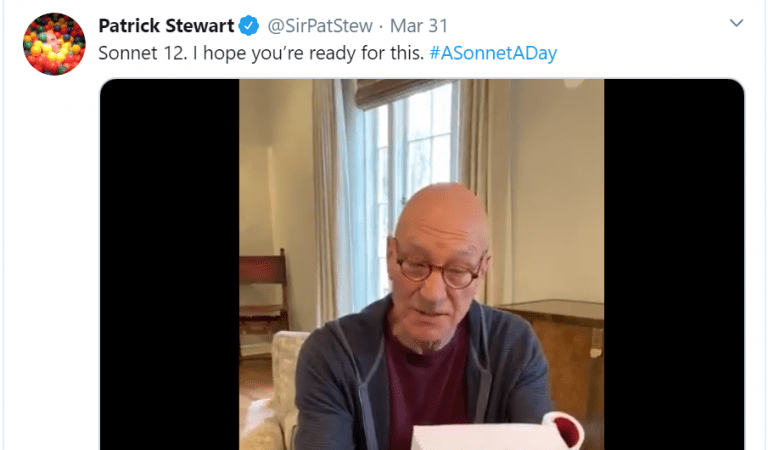 The Metropolitan Opera was forced to cancel its live presentations, but is re-airing its Live in HD series for free.  “We’d like to provide some grand opera solace to opera lovers in these extraordinarily difficult times,” said Met General Manager Peter Gelb. “Every night, we’ll be offering a different complete operatic gem from our collection of HD presentations from the past 14 years.”

Headlines all over the world have focused on the medical impacts of the coronavirus, and the financial impact of the government’s actions. Often overlooked has been the emotional an psychological impacts on individuals and families. But as we can see, private entities are combating government enforced boredom, demonstrating again that people will voluntarily help each other—and that help is always better than what the government offers.