8-year-old Kendall Manuel found herself stuck in the house with a lot of time on her hands once her dad was diagnosed with Covid-19. It started with a school assignment that had her making potholders from cotton loops. Her teacher would come by their home to drop off the supplies she needed. Kendall didn’t stop with the assignment and just kept on making the potholders. She has made over 150 of them at a rate of about 3 per day. She told CNYCentral, “I wanted to keep going because they are fun.” 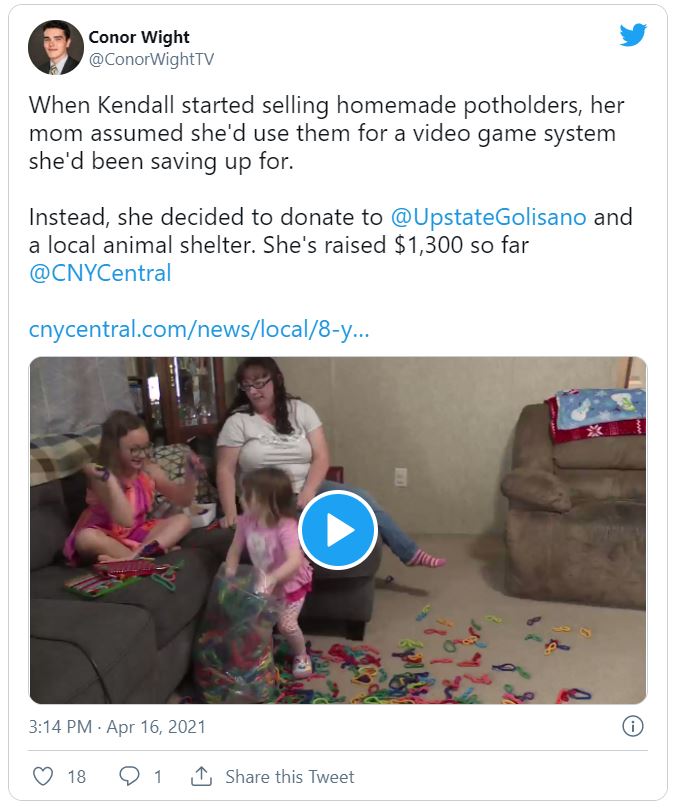 She began to sell them online and started to make a little bit of money. Kendall’s mother figured that she was going to use the profits to purchase a video game console she had her eyes on. But much to her mother’s surprise she donated the money she had made—over $1,300—rather than spend the money on something for herself. She donated the money to Golisano Children’s Hospital and to the Home Stretch Dog Haven in Moravia. Her mom was overcome with emotion and teared up when she heard what she was doing with the money, “When she told me I instantly started crying because I was so proud, at her age I never would have thought of that.” Indeed, how many of us as 8-year-olds would have thought to donate money to a children’s hospital and animal rescue charities?

Kendall is currently still making the potholders and continues to donate her profits rather than keep them for herself. Once word spread about what she was doing the orders just kept on coming in. She also likes to add a personal “Thank You” note with each potholder. She has no plans on stopping even with school picking back up saying, “I love making potholders, so I wanted to keep doing it for other people.” 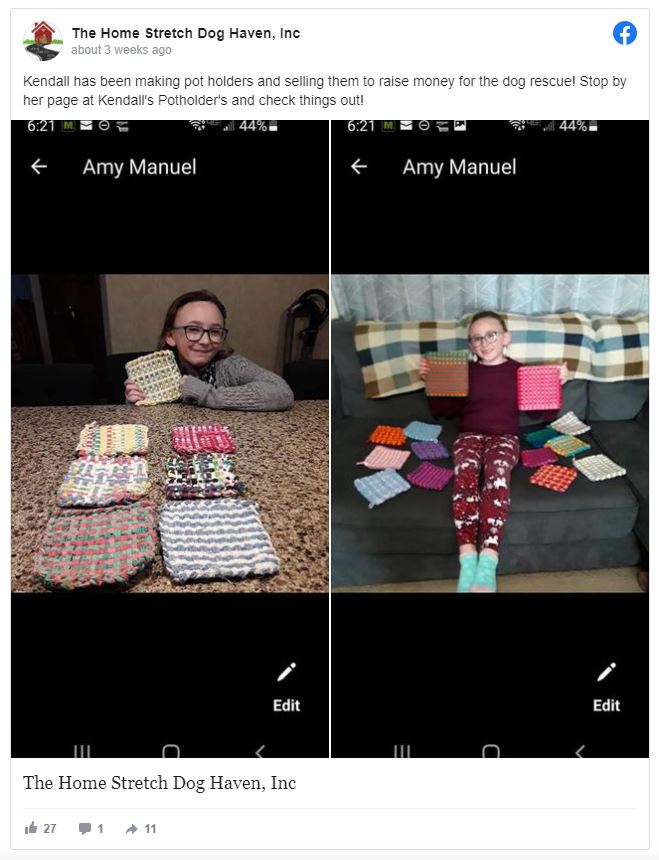 No one told her what to do with the sudden incoming money she was making, and this 8-year-old took it upon herself to voluntarily donate the money she was making—making lives better for others in her area and setting an amazing example for those around her as well as impressing her very proud parents. A quote from a post from her product’s Facebook page probably sums up this caring child best: “Along with doing her schoolwork and making potholders, Kendall is still doing chores to earn enough money to buy the Nintendo Switch that she gave up so she could donate the money that she has made from Potholders! This 8-year-old is AMAZING!” We really couldn’t say it better our self. It’s a touching story and a shining example of what people, even young children, can do to make the world a little brighter.

When the government began its destructive response to the COVID-19 outbreak, Louis Goffinet determined to help his neighbors weather the storm. But no good deed goes unpunished, and now the IRS is demanding that Goffinet pay more than $16,000 in taxes for helping the needy.

As the Hartford Courant reports, in April 2020 Goffinet started a fundraiser on Facebook, asking his friends to chip in a few dollars to help buy food for struggling neighbors that the government put out of work. By the time summer hit, more than $30,000 had poured in. Goffinet, a middle-school teacher who was stuck at home doing Zoom classes, used the money to buy and deliver food, help with rent, and buy gasoline for over 100 families in Connecticut.

The University of Connecticut hailed Goffinet as a “local hero”. A local Dominos Pizza began chipping in with pizzas for the recipients of the donated funds. Goffinet started a second fundraiser, which gathered another $10,000 in donations.

Everything seemed to be going great for Goffinet’s charity efforts—until he got a letter from Facebook telling him that he owed about $16,000 in taxes on the donated money. The IRS requires third-party transaction sites like Facebook to issue a 1099-K form on transactions greater that $20,000. And unlike ordinary people, the IRS is evil and does not care that Goffinet spent the money on needy families.

Goffinet told the Hartford Courant that he was “shocked” to receive the bill. “It’s such a big amount. It’s not like I can say, ‘Oh, for the next month or two, I’ll dial down my expenses and I’ll save $16,000.’”

Yet, unless he can get enough new donations to help cover the amount demanded, that’s exactly what he’ll have to do—or face confiscation of his property by the IRS. Registration as a 501(c)(3) nonprofit organization could conceivably have helped Goffinet avoid the tax bill, but that’s no small task.

At Voluntaryism In Action, many hours every month are devoted to filling out paperwork to keep our tax-exempt status. This isn’t reasonable for anyone, let alone a 27-year-old science teacher who’s just trying to help his neighbors. And this isn’t the first time that the government has tried to hurt people who’ve helped others during the pandemic. But this is yet another way that the government victimizes people: by punishing those who are efficient at providing aid to others—when they do not follow the government’s arbitrary rules.

It’s safe to say that people in the liberty movement are fans of alternate school choices—the farther distance from government involvement the better.  Private schools may be a good fit for some families, but they are still subject to the same government standards as public schools.  Charter schools have this same requirement in most regions, but are an appealing option because they give you funding for your educational needs.  While this funding does come from the government through the charter, one could easily view it as a personal tax rebate.  Although charters do give you a bit more freedom of choice than public or private schools, the option that is most customizable is homeschooling.  (Look up your local homeschool laws here.)  Unschooling and voluntaryism are a perfect match. Unschooling—one of the many ways to homeschool—is most in line with voluntaryist philosophy and will help you teach your children by personal example how to live a life fully rooted in consent-based interactions.

Just as consent is central to voluntaryist philosophy, the same is true of unschooling. Unschooling is interest-based and child-led.  While not being permissive or neglectful, parents allow their children the freedom to decide what to study and when.  Subjects are learned holistically instead of being artificially separated.  Emphasis is placed on helping children develop a lifelong love of learning by making it a natural, unforced part of the family culture.  For example, simply by reading aloud to your children often and keeping plenty of interesting reading material handy, children even learn how to read on their own—no phonics books, no sight-word drills, no setting timers for forced daily reading practice.  Instead, they get the satisfaction of accomplishing this themselves and the natural pleasure derived from reading what you like when you like.

Reading is perhaps the most common educational concern parents have for their children no matter what method of schooling they choose.  Because of the very strict government expectations for reading levels at government schools, many parents struggle with the thought of giving their children this much freedom.  It is my belief, however, that following the government’s lead on when and how to teach reading—the way most parents are now used to being the one and only process—poses far greater risks.  When children are forced to learn something, they naturally resist, and it could cause an early and lasting dislike for reading.  Additionally, government schools tend to push reading earlier than when many children have the brain development needed for decoding the printed word—again, causing unnecessary frustration for parents and children alike.  This earlier push for reading also encroaches on children’s free play time, which is the best and easiest way for children to learn many things and should be tampered with as little as possible.  In this way, the unschooling way of learning how to read follows the child’s natural course of development.

In John Holt’s famous work How Children Learn, he was one of the first teachers to study the natural language development in children from infancy.  He makes the connection that if spoken language were broken down into bits and taught to children in the same way that reading is, a natural process would become an extremely difficult one.  He hypothesized that if reading were allowed to be learned holistically the same way children learn how to speak, the process would be far easier and more rewarding for children.  He also observed that children are naturally self-correcting, so if parents will take a step back and allow them more freedom to make mistakes on their journey to literacy, they will be able to manage most of the difficulties on their own. More recent studies have shown that whether a child is an early reader or later reader (even up to age 14 being in the normal range) makes no difference in their overall proficiency.

The next most common concern parents have with unschooling is that their children won’t choose to learn what the parents want them to learn, or what parents think they need to learn.  As Connor Boyack explains in his book Passion-Driven Education, not all children need to learn the same things. In this book he offers great ideas for changing your expectations, thinking outside the box of standardized government schooling, and making life an educational journey.  Children develop in different ways at different times from each other, making it futile to standardize their educational experiences.  Even within the same families, what works for one child may not necessarily work for their siblings.

If voluntaryist philosophy is important to your family, unschooling your children is the best way to live those values consistently.  By giving your children appropriate freedom of choice and becoming their educational facilitators instead of their masters, you demonstrate to them that consent is important in all facets of life and in every kind of relationship—not just our relationship to government.  And speaking of government, what better way to put more distance between their constant interference and your family?

VIA is assisting low-income families with homeschooling resources and supplies—please click here to apply or to donate to this cause!